“Man, have you been in there yet?,” asked the clean-shaven bro in polo shirt and Oakley sunglasses. “Not yet,” I replied from my perch outside Splash Bar Florida, where I’d been interviewing Tony Boswell, the owner, for the past hour as part of the Who Needs Gay Bar Tour?

“Man, you gotta go in there, this place is the best time in Panama City!”
—“What’s so good about it?”
“The vibe, the atmosphere. Everyone is here just to have fun, man. There’s no assholes bumping into you who think they’re better than everybody else. Here everyone is just here to have a good time.”
—“Sounds nice.”
“It is! Everyone thinks so, too. Everywhere we’ve been, people tell us to finish our night here. You can go to other places for fun, but when you really want to have a good time you come to Splash.”

This was the third time in the last two weeks that a clean-cut, muscular straight guy had approached me in a gay bar. Straight people in gay bars have sometimes been flagged as a problem. Bachelorette parties can still be problematic in big-city gay bars, but were more so before same-sex marriage was legal. Sometimes big-city gay clubs become so popular with straight couples the gays abandon it. All of the owners of small-city gay bars I interviewed said they depended upon straight people to stay open. One owner even estimated his patronage as 80% straight. What is problematic in big-city gay bars is not in the rest of America.

We know why straight women enjoy gay spaces: an evening free of sexual objectification, a lower risk of sexual assault, and sometimes, a low-risk opportunity to sexually objectify men. I had never given any thought to what straight men might get out of visiting gay bars.

The first time this happened to me was at Nellie’s in Washington D.C, which was featured in a Washington Post piece about gay bars becoming just bars. I was there the evening of the Equality March for Unity and Pride, and the place didn’t look like “just a bar to me: it was heaving with queers in rainbow attire, mostly white folks downstairs but mostly African American upstairs. A tanned, white shirtless man lurched up to me and shouted about what a great time he was having. Over shouted small talk he put his hand on my shoulder and asked where I was going later.

—“Where should I be going?” I asked, and winked.
“We’re thinking of going to the Black Cat, unless there’s something more exciting.”
—“I can think of something more exciting,” I said with a smirk.
“Oh! No no no no, I’m straight!”
—“That’s okay, I don’t mind.”
“No, I’m extremely straight.”
—“Prove it!”
He lurched away, disappointingly unbothered. 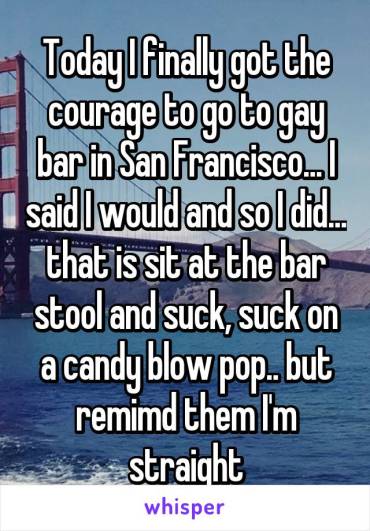 At New Beginnings in Johnson City Tennessee, I was getting ready to leave when a muscular blonde in his late 20s approached me. He told me it was his first time here, assuming it wasn’t mine as well. A girl who liked him brought him, he said, and he decided he would give it a try because only recently he’d befriended a gay guy at work. Barrelling on in full confessional mode, he shared how much he respected his friend’s empathy and that it had really made him question some core things about himself. As his friend came to collect him, he said he’d be there in a minute. He grabbed my hand and asked for my phone. “Take my number, and then we’ll always be connected.” I unlocked my phone and when he handed it back, my contacts had his phone number and full government name. “Text me man,” he said, and went to join his friends.

I’m not sure what I think about this new development in gay bars, these lone straight men and their effortless approaches to gay men without consequences. There have always been straight men in gay bars, of course: unassailable bartenders or strippers, or clinging to women as some sort of heterosexual lifesavers. Tory observed that anytime sexual orientation needed adverbs to qualify it (“extremely,” “super”) there was something going on. After reading Jane Ward’s book Not Gay, however, I was willing to accept that these guys were what they said they were, even though it’s likely they were dipping their toes into gay waters.

Vince, the doorman and sometime DJ of Joplin, Missouri’s Equality Rocks reported how they’d had a group straight men who enjoyed visiting their club:

We had a group of probably eight straight guys who would come and hang out, just regular guys. They would request music, they’d have a good time–the would grab whoever and dance. They were in their 20s. Two of them at least are married now, I think that’s why we don’t see them so much. You didn’t see that ten years ago.

Misty Meanor, one of the “E.R.s” house queens, commented on the welcome novelty of the phenomenon:

It’s amazing to see when straight guys really don’t know what to think about the shows, but after we razz them and get them to interact, 9 times out of 10 they come up to us and tell us how much fun they had during the show.

Most of the time if we pull a straight guy up on stage and razz him, we tell him if he brings in friends next time we will give them a hard time. And they love that!!! Then they bring a group of guys in the next weekend. So it really helps getting new people into the bar.

At the last bar on this leg of the tour, at Springfield, Illinois’ Club Station House, a couple sat next to me at the bar. The woman looked bored, the man pounded on my shoulder. “What’s going on, Chief?” He smelled sour from a night of drinking. He proceeded to buy shots, shouting at the TV, telling the people in music videos what they should be doing: “Naw, don’t dance over there, go get back into the car!” This all could have been amusing, but I was annoyed. I guess I could have tolerated him if he’d been less drunk, less boisterous—or more into me. 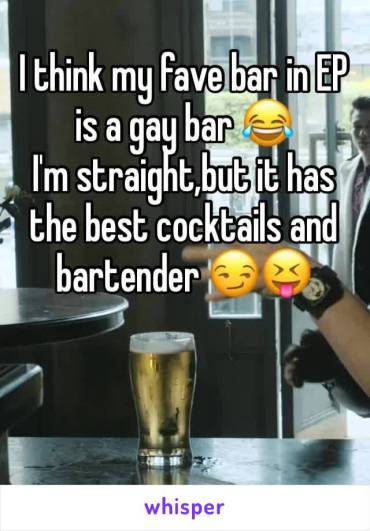 One thought on “Straight men in gay bars approach me”