Sociologist of sexuality, cities and the state

“This is the least-gay gay bar,” claimed Matthew Heath-Fitzgerald, the owner of Fat Mary’s in McAlester, Oklahoma. The bar is in a former goat barn on a country road, next to the cemetery for the Oklahoma State Penitentiary, whose lights gleam across the fields. The other major employer is the Army ammunition plant at the edge of town.

On the other hand, the interior is a glittering palace of rainbow decorations and disco mirrorballs. Inflatable pickles hang from the ceilings, as does a mirror-encrusted pair of cowboy boots, an heirloom of a closed gay bar in Tulsa. It seemed pretty gay to Tory and I. 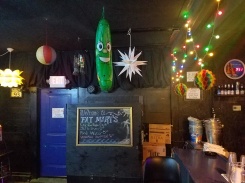 The bar is a sought-after performance space for drag queens, hosted by Mister Bunny Lamar, Matthew’s husband. Matthew and his original two business partners built a dressing room tailored for performers, with lots of storage and dressing space, plenty of mirrors, and a high-powered air conditioner to keep the queens cool while they prepare. As he says,

I worked for 15 years with girls and they were never talking about wanting to go to a club. And they’re beating down my door. I have to turn people down every week, I’m full for 3 months. The people love them and are polite. My staff is polite. Everybody is real. Very very very real. My patrons are amazed by some of the simplest stuff and [drag queens] love that.

“80% of my customers are straight,” Matthew explained, by way of his claim that Fat Mary’s is the least-gay gay bar:

I wanted a gay bar. A supported-by-gay-people gay bar. And I’m not. I know what the gay population is in Southeastern Oklahoma. I have my good, steady gay customers, but I couldn’t depend on them.

Straight couples from the county of 46,000 people are the main customers to this gay bar, the only one in Southeastern Oklahoma that is known variously as the Choctaw Tribal Jurisdictional Area, which replaced the reservation dissolved by Oklahoma Statehood, or “Little Dixie,” for the number of Confederates who settled there after the Civil War. Fat Mary’s customers come for the drag shows on Saturday nights, and for Karaoke with Queens on Wednesdays.

Fat Mary’s main competition is the VFW Hall (Veterans of Foreign Wars), which has a major karaoke night, and the lake: in the summertime there are fewer customers because they spend the daylight hours outdoors. But in the other three seasons, after a day of work, couples come to Fat Mary’s:

People from town never saw themselves ever going to a gay club. They come in and they realize they won’t be maimed–unless I have a crazy queen on that week, and then it’s in jest and [my customers] love the attention.

In the three years the bar has been open they’ve had no problems. Matthew reports that Grindr doesn’t cut into his gay clientele at all:

Our community is so small that if they were sitting next to each other on Grindr, unless they came in here as friends, they’ll be too embarrassed. Maybe [they’ll do it in other gay bars] but not here. People come here to drink and interact. Maybe they’re on Grindr before they come here, but I hope they tell people, “Hey, I’m going to Fat Mary’s!

When asked about the spate of gay bars closing, Matthew contributed a historical perspective:

Garth Brooks in the DJ booth.

Cowboy hat and patent-leather pumps in the dressing room.

I’ve made a nice community here. I can only hope that it continues to pay the bills. As long as I’m doing what I’m doing and people are still finding out about it and enjoying the quality of show that I put on, that’s really what it’s about for me.

His customers and entertainers from from as far away as Denison, Texas; Tulsa, Oklahoma; and Fort Smith, Arkansas: the nearest gay bars. As Matthew says of Fat Mary’s, “it’s the only place in miles that you’re going to find anything like this.” I reckon it’s the only place in the entire world.

Tory Sparks contributed research and live interview transcription for this post. You should hire her!