I’m currently working on a book with my colleague Libby Murphy based on our OMEKA digital humanities project called In Search of Lost Women.

In 2016 my book he The Cultural Politics of European Prostitution Reform: Governing Loose Women was published by Palgrave Macmillan. One reviewer called it a “well-researched and compelling” example of “taking a specific social problem and showing how it encapsulates cultural dynamics,” and thus making a “substantial contribution to our understanding of how social problems are articulated ‘int the trenches’ by activists and bureaucrats.” Another praised its “fascinating in-depth interviews with stakeholders” that yield “striking insights into the framings of the issue and the wide gap separating pro-legalization protagonists and abolitionists,” and calls it “truly innovative in establishing the link between welfare state type and type of reform.” 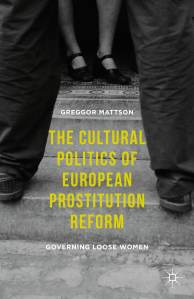 Two of my articles on prostitution are as follows:

The Modern Career of “The Oldest Profession,” and the Social Embeddedness of Metaphors. 2015. American Journal of Cultural Sociology 3(2)

Metaphors are elementary particles of meaningfulness, serving as cognitive resources for framing social problems or social movement narratives. This article presents a diachronic analysis of a metaphor synthesizing insights from cultural sociology and conceptual metaphor theory (CMT), an interdisciplinary neuroscientific program with robust empirical findings for how meanings change over time. I track the diffusion of ‘the most ancient’ metaphor for prostitution through publications on both sides of the Atlantic from its coinage by Rudyard Kipling in 1888. I explain the puzzle of its persistent polysemy by its embeddedness in three discursive communities: occupational professionals; social movements demanding state action against white slavery; and journalists, writers and cultured readers. These competing uses explain the paradox of how a metaphor about prostitution’s timelessness became a convention at the very movement that prostitution’s abolition seemed possible. While this single metaphor was used to express multiple opinions about prostitution’s inevitability, it shored up the ontological status of prostitution, a concept that contemporary researchers still struggle to unpack or displace. The diachronic analysis by which cultural categories are juxtaposed and reified is one of the insights of CMT for social cognition, with implications for sociological analysis of narratives, tropes and discourses.

This position paper is a primer on research trends and tensions in the study of sex work and human trafficking. Our intent is not to provide an exhaustive review but rather an overview of the current state of the field based on the authors’ expertise. This paper is divided into four sections: First we introduce the cultural and political roots of the study of sex work and trafficking. Next we define terms and identify key theoretical issues and debates. Third, we point to methodological needs and challenges to studies of sex work and human trafficking. Finally, we point to several areas in need of more research.