Also see The Who Needs Gay Bars? Tour parts One and Two.

Club South 29 in Spartanburg, South Carolina is hard to find. It’s the only gay bar in the 10-county Upstate region of 1.4 million people. Like many other bars, they have no sign, their website is defunct, their Twitter inactive, and only during frantic googling from a neighboring parking lot did I learn from a promoter’s website that it was a private membership club that required an application 24-hours beforehand.

The address is a number on U.S. Highway 29, but you can’t see building numbers at 55 miles per hour, at day or night.

GPS told me I’d passed it so I drove through connected parking lots of the pawn shops, muffler shops, and auto-body yards with my windows down, but all I could hear were crickets, frogs and zooming cars. If I didn’t know that Aja from RuPaul’s Drag Race was performing that night I would have assumed the club didn’t exist. Only from the alleyways could I hear a distant thump-thump-thump over the other night sounds. On another pass I saw a break in the chain link fence that I assumed was the auto body yard, but was actually the parking lot. Only the thumping and orderly cars showed a club was nearby, signaled only by a man with a metal-detecting wand, two traffic cones and a chair outside the only door. 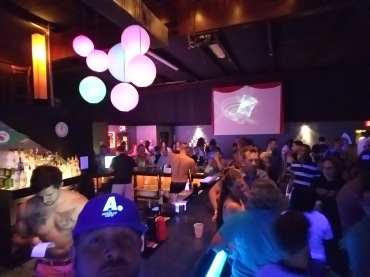 I had no appointments–the owners begged off because they were too busy arranging Aja’s visit, and I couldn’t blame them. If you pay thousands of dollars to fly a celebrity into town, you don’t want to waste your time with a sociologist (as one fan of the show explained with a combination of self-deprecating awanress and fierce ownership, “they’re not real celebrities, but they’re ours” ).

Out on the Astroturf patio, my night was saved by the The Greenville Sisters of The Abbey of the Grand Palmetto, the local chapter of the charitable and spiritual powerhouse Sisters of Perpetual Indulgence.

How far away is Atlanta?
–3.5 hours.
What’s the River’s Edge?
–Oh, it’s the clothes-optional gay men’s campground.
So you’re telling me that people are naked in the woods instead of watching one of RuPaul’s girls perform in the only gay club around?
–Must be!

I asked were all the Black folks were: there were fewer than 20 in the club, this in a county that is half African American:

–“Oooh, I wish we had a Black gay club again, we’ve had them before,” said Sheida.
–“I miss the Castle,” added Guard Björn DeSway.
Sheida listed a few other clubs from days gone by, concluding:
–“Let’s just say the Black clubs are inconsistent.”

As the show went on people kept coming into the club, most of them African American. Before I realized it, the club was one-third Black by the time the show ended around midnight.

I’d already had a long day of driving, walking the trails of The Battle of Cowpens National Battlefield, and a heavy meal. I felt bad leaving early, but as I keep telling myself, this is a marathon not a sprint. 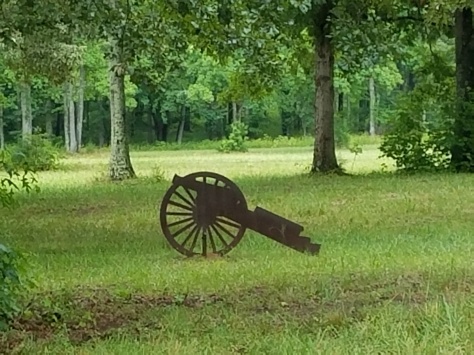 5 thoughts on “Road Notes 3: Abbey of the Grand Palmetto”